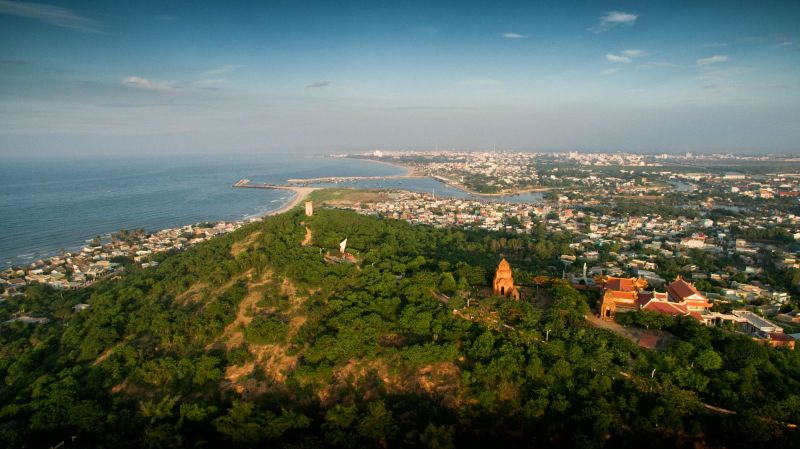 There is an interesting destination with antique, mysterious, spiritual beauty in Binh Thuan that tourists should not ignore: Po Sah Inu towers (or Cham towers of Pho Hai).
Po Sah Inu towers is a group of remaining Cham towers of ancient Champa Kingdom, which are situated in Ba Nai hill, Phu Hai Ward, 7km to the North-east of Phan Thiet city. 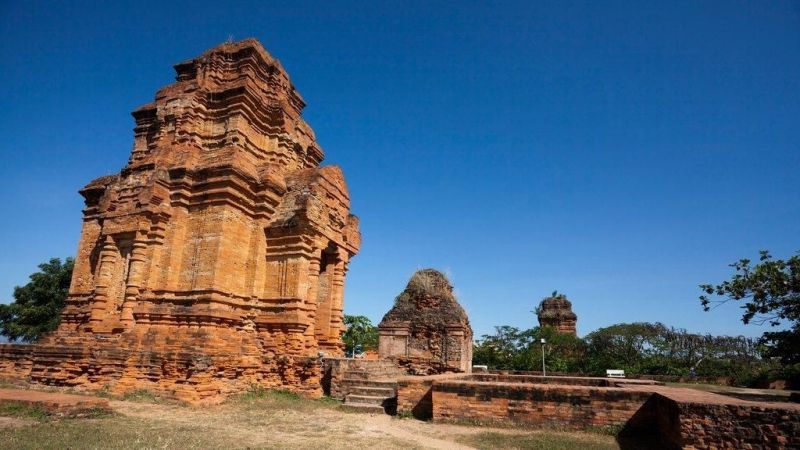 The group of Po Sah Inu towers was built over 1.200 years ago and now only three towers left: main tower, medium tower, and small tower or A, B and C towers. These towers were the symbol of the heyday of Champa Kingdom from VIII to IX centuries. These towers were first built to worship Shiva, but then they are also used to worship princess Po Sah Inu. Besides, the deity of fire and Nandin (the holy bull - mount of Siva) are also worshiped here.
Between Tower A is an altar of Linga – Yoni made of slippery stones, a symbol of men and women’s private parts. According to the legend, Tower C is a place to worship the fire God, and also where pilgrims were waiting before going to the main tower, Tower B is where to worship the Cow God Nandin. However, this statue does not exist anymore.
The tower is Square, three – the storey that is gradually narrow to the top. The wall columns of the towers are cylinder shaped, belonging to the artistic style of Hoa Lai tower group. All of the main doors of towers face to the East, which, according to cham people, are the directions of deities. Po Sah Inu Cham tower was classified as a National heritage on August 3, 1991, by the Ministry of Culture – Information. 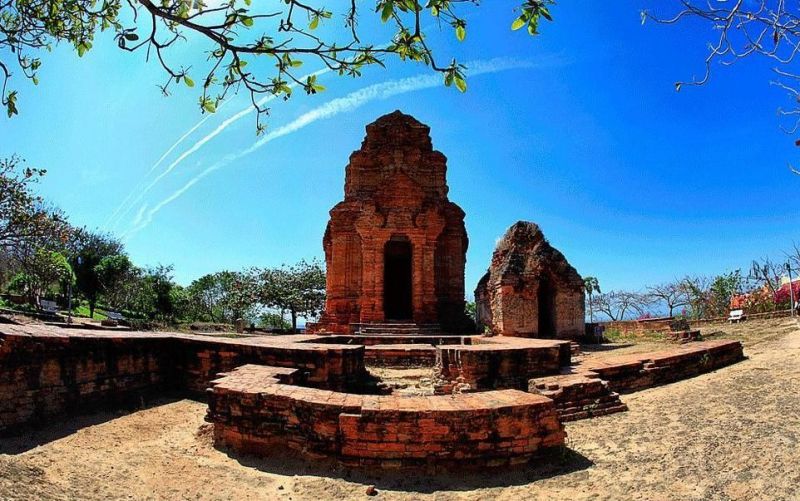 Here, visitors can perceive the unique, exquisite architecture of the towers. Sculpture in ancient Cham style makes this place more august and enigmatical. The towers are situated in Ba Nai hill, right next to the famous Lau Ong Hoang in romantic verses of Han Mac Tu. 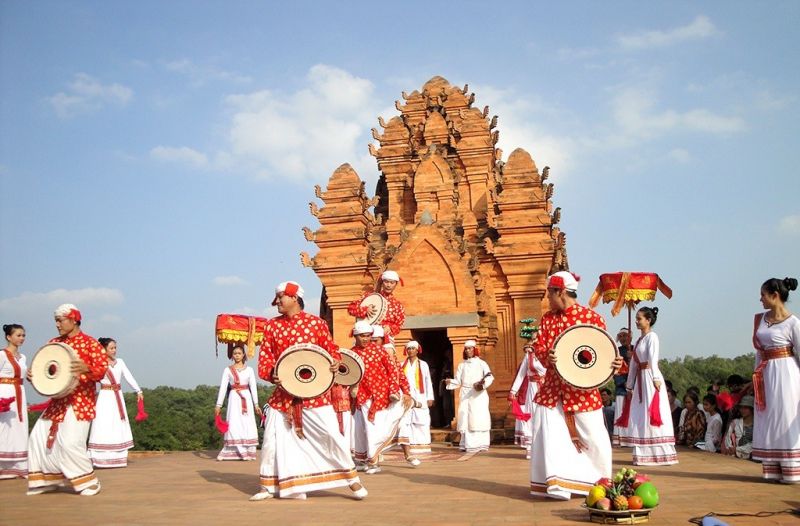 Looking down from the hill, you can see a beautiful natural landscape, blue sea ahead and Phan Thiet city behind. Located in a place of beautiful terrain, this site can make tourists feel relaxed, give them chance to discover a spiritual land and contemplate charming scenes.
Being recognized as a national relic, Po Sah Inu towers attract tourists with its primitive, hallowed beauty. Relics of worship of ancient Cham people still remain here. 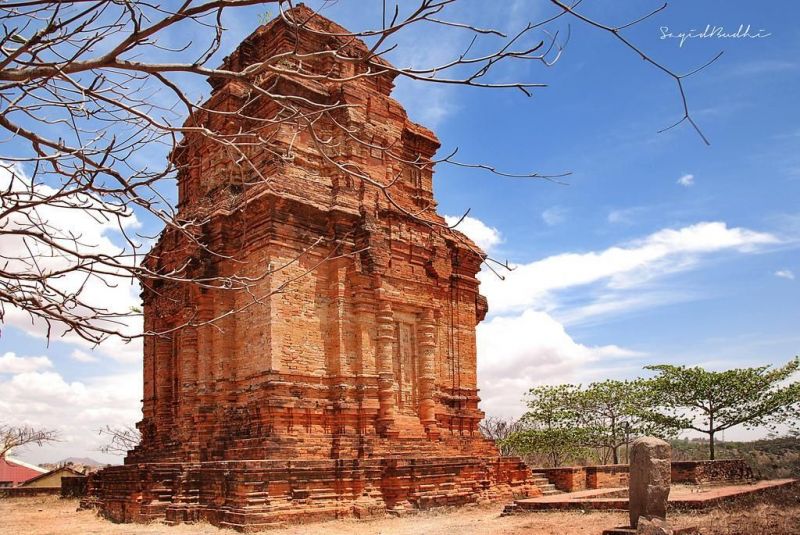 Every day, the management board of Po Sah Inu Cham tower group opens its door to receive guests from different regions to see its old beauty filled with artistic, mysteries about Cham people’s construction arts. Po Sah Inu tower is not only a pride of cham people, but it helps to enrich Vietnam’s cultural and historic treasure generally, as well as that of Binh Thuan’ specifically.

Combo Honey Moon A 3-days 2-nights package for TWO is now ONLY $199 at Ravenala Boutique Resort, including: 02 Breakfasts. 01 Romantic Dinner (of your choice from our menu from Ravenala Restaurant) that is set up for you by the Pool / Beach with wine Luxury Room Types An Anniversary Photo Frame of You Two A Revanala Cup. (Include VAT, All Taxes, Services Charge and Fee)

Combo Honey Moon A 3-days 2-nights package for TWO is now ONLY $199 at Ravenala Boutique Resort, including: 02 Breakfasts. 01 Romantic Dinner (of your choice from our menu from Ravenala Restaurant) that is set up for you by the Pool / Beach with wine Luxury Room Types 02 Ways Bus Tickets for two HCMC - Mui Ne Free Massage Body for two An Anniversary Photo Frame of You Two A Revanala Cup. (Include VAT, All Taxes, Services Charge and Fee)

Bungalow Beach Front – Honey is a well - designed and deluxe room of Ravenala Boutique Resort. The room is a perfect choice for honeymoon couples or those who wish to enjoy a romantic holiday. The total area of 65 square meters provides a comfortable and pleasant space just like your home.

Bungalow Beach Front - Sunny is a stylish, luxury and well-equipped room of Ravenala Boutique Resort. The highlight feature of this room is its location as a beach front property, which gives customers a perfect view to contemplate the beautiful sunrise and sunset of Muine.

The Junior Suite - Garden View is a charming 49-square-meter room of Ravenala Boutique Resort. This room is a mini apartment with a living room and a bedroom, perfect for couples or families.

Junior Suite with Balcony is a sweet room located in the first floor of our front building. Guests have not only a garden view but also a city view. This room has easy access to our receptionists, restaurants, pools, etc. Luxuriously decorated with full equipments, a living room and a bedroom (double bed). This room provides you a relaxing space to relax with your lovely family or your loved one.

Elegant interior furnitures harmonize with amazing view overlooking the sea/pool. This room is perfect for those who in love with the tropical sunshine, the harmony of the wind and the savor of the sea. The interesting thing about Sea/Pool View Premium rooms is that you can sit in the balcony, enjoy a cup of coffee to start a new day, listen to the waves and immerse in the sunshine.

Deluxe Sea View Window is located on First & Second Floor where you can have the overview through the red of roofs, coconut trees, and the sea. Moreover, you will be relaxingly woken up by the sunshine from the window and the sound of the sea.

For those who have a dreamlike soul, enjoy watching the green air in the wind, these rooms are the perfect choice for you. The room provides accommodation for 2 people, with an extra bed for the third guests (request) together with the service from our friendly staffs.

Located on the ground and second floor of the resort, Superior rooms are design in "quiet" style with elegant decoration.

Located on the ground floor of the resort with street view, only for a few steps to the Restaurant and Lobby. You could also immerse in the cool water of the pool or beach. The room is for 4 guests, good for family, with full facilities and services of the resort. For Ravenala Boutique Resort, our mission is "service from the heart", bringing you great moments of relaxation.

Small and pretty resort, green space and cozy. Rooms are clean and airy. My room is a sea view so I can watch the sunrise and sunset. The restaurant is one of my favorite here.

5 stars for quality, everything is perfect.

I am grateful to Ravenala Boutique Resort I respect the precious sentiment of VYC Company for those close customers like me ..

"Beautiful resort, delicious dishes. In general, traveling with VYC is so wonderful. My family really enjoys our holiday"

A wonderful resort with a green garden and tropical vibe. There was a clean swimming pool in front of our room. Staff was always friendly, professional and wholehearted.

Staffs were friendly and enthusiastic, we had a wonderful time here, we recommend it to everyone.

My family had an at ease and comfortable occasion, a beautiful resort, fresh and romantic atmosphere

A beautiful place, wonderful atmosphere, and wonderful services. This place is suitable for rest and holiday. I will definitely come back to this resort. The resort, which is tidied up twice a day, is very clean and comfortable.

The green of trees, the blue of the pool. Everything was clean, food was delicious and the price was cheap. The staff is friendly, they were always welcome me and give me a smile

We have the opportunity of having a room right on the beach which was absolutely phenomenal. I could hear the wave sprayed and I can go to sleep while listening to the ocean. I saw the sunrise in the morning.

I must say that Ravenala Resort is the most awesome resort that my family and I stayed in Mui Ne. I truly can't wait to come back there to stay again in the near future.

“Ravenala Boutique Resort is a resort with private beach with 41 rooms, which was invested by VYC travel and operates just a couple of months. While the resort is small, it is well - designed with facilities and a lot of green trees."

We are very happy, we wish the company always have successful and stable development. The company held a ceremony, buffet and gave presents to the loyal customer at the pool of the resort. It was in high-class services and comfortable.

Resort Ravenala - Phan Thiet of VYC Travel has recently opened - warm, peaceful, gentle, grateful... I always choose VYC travel for my journey exploring new land because I put all my beliefs into my dear friends. Wish you have a wonderful success.

Resort close to the sea only a few steps, nestles in the luxurious and shady campus, which is very suitable for the holiday.

The weekend was fun at Ravenala Boutique Resort of VYC. I was really surprised when invited to Gala Dinner “Connect and Development” by company

I am really happy to be guest of VYC TRAVEL to have a weekend vacation at Ravenala Boutique Resort. Despite the limit of time, I have many imprinted memories. The Landscape, living spaces and peple are not only new, fresh and modern but also charming, luxurious and powerful.

Having a chance to relax at Ravenala Boutique Resort of VYC Travel, with the overall landscape and pool, she said: “RAVENALA Resort has a nice overflow pool”

Sharing about Ravenala Boutique Resort, Mr. Johanson said: "The natural space of the garden and private beach of the resort are beautiful, especially the very wide pool where you can take a look at the sea in beauty and harmony.

Sharing about Ravenala Boutique Resort, Mr. Rick said: “The lobby is very eye-catching and the whole architecture of resort not only is nursed but also closes to nature. Rooms are equipped with modern amenities, the bathroom is also given a subtle care and very clean”

Ravenala Boutique Resort is my first choice for my family when going to Phan Thiet - Mui Ne. I like the elegance here.

One evening, I had a walk on Nguyen Dinh Chieu street, by accident, I explored this resort. I was impressed at a first glance.
Xem thêm